A layer of polymer chains tethered by one end to a surface is called polymer brush and known to show various unique properties such as prevention of protein adsorption and anti-fouling activity. The surface segregation phenomena of copolymers with surface-active blocks should be useful for preparing such a brush layer in spontaneous process. We reported hydrophilic polymer brushes formed at the interface between water and hydrophobic polymer matrix by the segregation of amphiphilic diblock copolymers blended in the matrix. In this system, while the hydrophilic block with high surface energy avoids air surface it segregate to cover the interface between hydrophobic PDMS and water as schematically shown in Figure 1. The structures of formed brush layers at D2O/polymer interfaces were analyzed by neutron reflectivity (NR). The brush density was calculated to be as high as 2 chains/nm2, which is surprisingly comparable to the polymer brush fabricated by the “grafting-from” method. The kinetics of dynamic polymer brush formation was investigated using Quartz Crystal Microbalance (QCM) and time-resolved NR. We further extended the approach and established the fast responding dynamic polymer brush system. 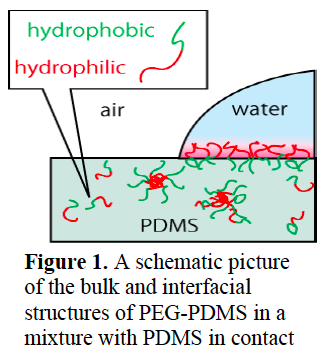 About the guest speaker:

Hideaki Yokoyama received his B.S., M.S. degrees from Tokyo Institute of Technology, Japan, and his Ph.D. in 1999 from Cornell University under advisor Prof. Ed Kramer. He worked at Bridgestone as a researcher before joining National Institute of Advanced Industrial Science and Technology (AIST) as a scientist in 2001. In 2008, he moved to the University of Tokyo as Associate Professor.

Chiral Material and the Electrons’ Spin - A Miraculous Match