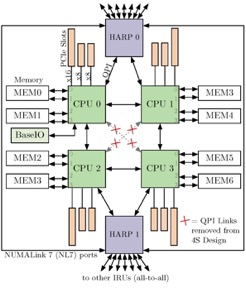 The Figure shows a block diagram of an individual rack unit of an HPE SGI UV300. The HARPs are responsible for maintaining cache coherency and providing a common address space across CPUs. Now, the GRU provides a new functionality to asynchronously copy memory between CPUs and to accelerate atomic memory operations. In this joint paper with the Hasso Plattner group of the Hasso Plattner Institute in Potsdam, we treated an HPE SGI UV and its GRU as a playground to investigate the overall potential of hardware-accelerated main memory operations for in-memory database systems [1]. In detail, we investigated the capabilities of the GRU to speed up database operations and removed bottlenecks in a typical in-memory database system.