A Dresden research team led by solid-state physicist Dr. Axel Lubk has succeeded in imaging the magnetic field of tiny magnetic nanovortices - called skyrmions - in three dimensions with a resolution of seven millionths of a millimeter. This is the first time ever that this has been achieved. For their pioneering work, the scientists have now been honored by the European Microscopy Society (EMS) with the Outstanding Paper Award 2021 for Materials Science. Project leader Lubk is a member of the Würzburg-Dresden Cluster of Excellence ct.qmat - Complexity and Topology in Quantum Matter. He will assume the CEOS Endowed Professorship for Electron Optics in August, a joint appointment of the Technical University (TU) Dresden and the Leibniz Institute for Solid State and Materials Research (IFW) Dresden.

The revolutionary novelty of the research success from Dresden: Until now, there were only two-dimensional images of these objects, called skyrmions, either on the material surface or as a projection. However, this meant that the depth resolution was completely lost and it was therefore not possible, for example, to distinguish between what was at the front and what was at the back. The spatial representation that has now become possible is a milestone in the field of nanomagnetism and "spintronics", where skyrmions could replace bits and bytes as units for data storage in the future.

Yet the underlying experiment of the Dresden research team could only be carried out at the Ernst Ruska Center in Jülich in February 2020 with a lot of luck. This is because immediately afterwards, the research center was closed to external experiments for a long time due to the Corona pandemic. "When we subsequently evaluated the obtained data back in Dresden, our joy was immense. We had actually managed to make the magnetic field of these vortices visible in three dimensions. Today, we receive inquiries about this from all over the world," reports Dr. Lubk, who is currently a group leader at IFW. 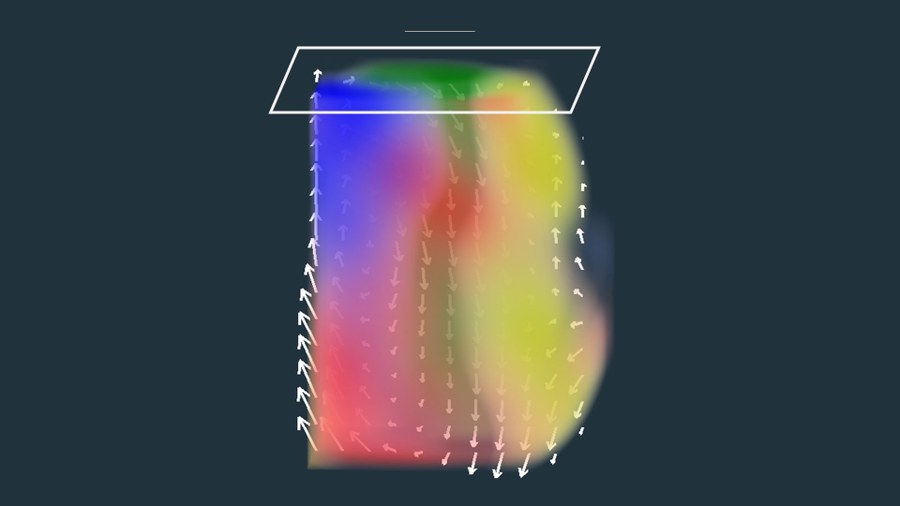 Until now, information is stored and processed mainly on a semiconductor basis, i.e. via a flow of electrons. But electronic systems are limited in their performance. The search for alternatives is occupying research and industry worldwide, and the focus is increasingly shifting to optical and magnetic information processing, the latter known as spintronics. The reason for the research hype around magnetic vortices, the skyrmions: With their help, data could be transported in the future in an extremely energy-efficient and space-saving manner. The tiny skyrmions, which are between ten and hundred nanometers in size, are among the topological quantum phenomena that are being researched in the ct.qmat Cluster of Excellence. They are extremely stable and can be easily manipulated.

"Until now, the scientific community had only a two-dimensional picture of skyrmions, which offer much potential for novel storage and processing of large amounts of information. The three-dimensional image is a real milestone for solid-state physics. For the first time, we were able to see how bent these whirlwinds are and how they influence each other," comments Prof. Matthias Vojta, Dresden spokesperson for the ct.qmat Cluster of Excellence.

The story of the pioneering achievement from Dresden

In 2006, magnetic skyrmions were predicted theoretically. In 2009, they could be detected experimentally for the first time indirectly. In 2010, the first direct two-dimensional imaging was achieved. Dr. Lubk's research team has now succeeded for the first time in imaging all three dimensions of the magnetic field of skyrmions with a resolution of a few nanometers. For this purpose, the team studied iron germanium (FeGe) using tomographic methods in a transmission electron microscope.

"The biggest challenge in our research project was the experimental setting. We spent five months developing a holder for the sample so that it could rotate 360 degrees. In the end, it was only through a combination of different technical methods and advancements that we were able to see that the nanovortices are actually tubes," said Dr. Lubk. "The skyrmion tubes move like whirlwinds in the material, and when another whirlwind gets too close to them, they change." The research was published in the journal Nature Nanotechnology in March 2022. In May 2022, the team of authors received the 2021 Outstanding Paper Award for Materials Science from the EMS for their three-dimensional imaging of the magnetic structure of skyrmion tubes, identification of their structural details and measurement of their energy density.

The breakthrough involved Dresden researchers from the ct.qmat Cluster of Excellence, IFW Dresden, TU Dresden and the Max Planck Institute for Chemical Physics of Complex Systems. The experiment was conducted by Dr. Daniel Wolf (IFW) at Forschungszentrum Jülich. The special mounting of the sample, which made the tomographic images possible in the first place, was developed by Dr. Sebastian Schneider (TU Dresden, DCN).

After the three-dimensional imaging and characterization of skyrmion tubes, the Dresden research team is focusing on the analysis of further 3D nanomagnetic phenomena and the search for materials in which the magnetic vortices are generated at room temperature and without an external magnetic field. At the same time, the researchers are working on the further development of the experimental setup in order to make the method accessible to the worldwide scientific community.

Outstanding Paper Award
The EMS (European Microscopy Society) presents the annual Outstanding Paper Award in three categories. A jury selects the most significant publication in the field of microscopy. The prize is endowed with 1,000 euros and was awarded this year in May at the PICO conference in Jülich.

Cluster of Excellence ct.qmat
The Cluster of Excellence ct.qmat–Complexity and Topology in Quantum Matter is a joint research collaboration by Julius-Maximilians-Universität Würzburg and Technische Universität (TU) Dresden since 2019. More than 270 scientists from 34 countries and four continents perform research on topological quantum materials that reveal surprising phenomena under extreme conditions such as ultra-low temperatures, high pressures, or strong magnetic fields. The Cluster of Excellence is funded within Excellence Strategy of the federal and state governments-as the only cluster in Germany that traverses federal state boundaries.