Changes in an organic thin film’s optoelectronic properties as induced by small structural changes can be small or large, and conversely, the impact of significant structural changes on the charge transport properties can be both negligible and drastic. This is due to the steric, spatial, and angular complexity and inner structure of many organic molecules, resulting in a highly complex relationship between molecular geometry, supramolecular assembly and charge transport. We are, therefore, interested in understanding, exploiting and ultimately predicting and controlling polymorphism in organic semiconductor materials. 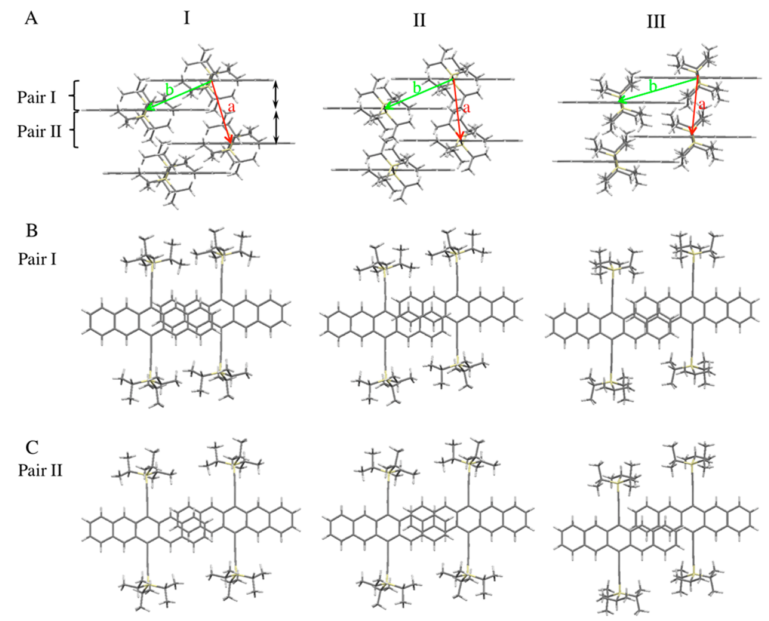 We recently showed that nanoconfinement effects as generated in meniscus-guided coating methods such as solution shearing allows us to prepare ultrathin films of thermally stable, pure forms of the different TIPS-pentacene polymorphs some of which do not stably exist in thick films or in the bulk at room temperature.1 In another study, we proved the existence of a “thin film” polymorph of the high‐performance, p‐type small molecule N‐octyldiisopropylsilyl acetylene bistetracene (BT) by in situ grazing‐incidence X‐ray diffraction.2 Another example of such polymorphism in organic nano-objects are vertical zinc phthalocyanine (ZnPc) pillars grown on graphene.3 Without a change in the films mesoscale morphology, these pillars undergo a thermally induced phase transition from the novel, as-cast metastable crystal phase to the more stable β-phase as commonly observed in bulk crystals.

The doping of organic semiconductors (OSCs) is, similar as for inorganic semiconductors, of great relevance for the realization of electronic devices. Possible functions of dopants are increasing the conductivity of a material, improving the injection or extraction of charge carriers at metal/semiconductor interfaces and the potential realization of p/n junctions. In contrast to inorganic semiconductors, like silicon, where doping is achieved by introducing foreign atoms into the crystal lattice, for OSCs usually molecules are used as dopants. The reason for this is that, unlike inorganic doped materials, the dopants in organic materials are not usually covalently linked to the host material which would cause diffusion of atomic dopants within the film or even diffusion out of the film. Instead, the addition of the larger dopant molecules produces stable films and leads to either an oxidation or reduction of the organic semiconductor, resulting in the generation of free charge carriers.

In recent years, we have studied, in close collaboration with the Leibniz Institute for Polymer Research (IPF), novel dopant molecules and their compatibility with a variety of OSCs.[1–5] One class of novel dopants is based on a hexacyano-substituted [3]-radialene. The neutral form of this molecule (CN6-CP) has shown to be a very strong dopant with donor-acceptor copolymers, unfortunately its poor solubility in organic solvents limits possible applications.[1] The solubility limitation can be solved by using the anion-radical of CN6-CP, which dependent on the used cation can be dissolved in water and a wide range of organic solvents. Although the reduction of CN6-CP leads to a lower doping strength it is still able to act as a dopant for a variety of p-type semiconductors, like P3HT.[2,3,5] 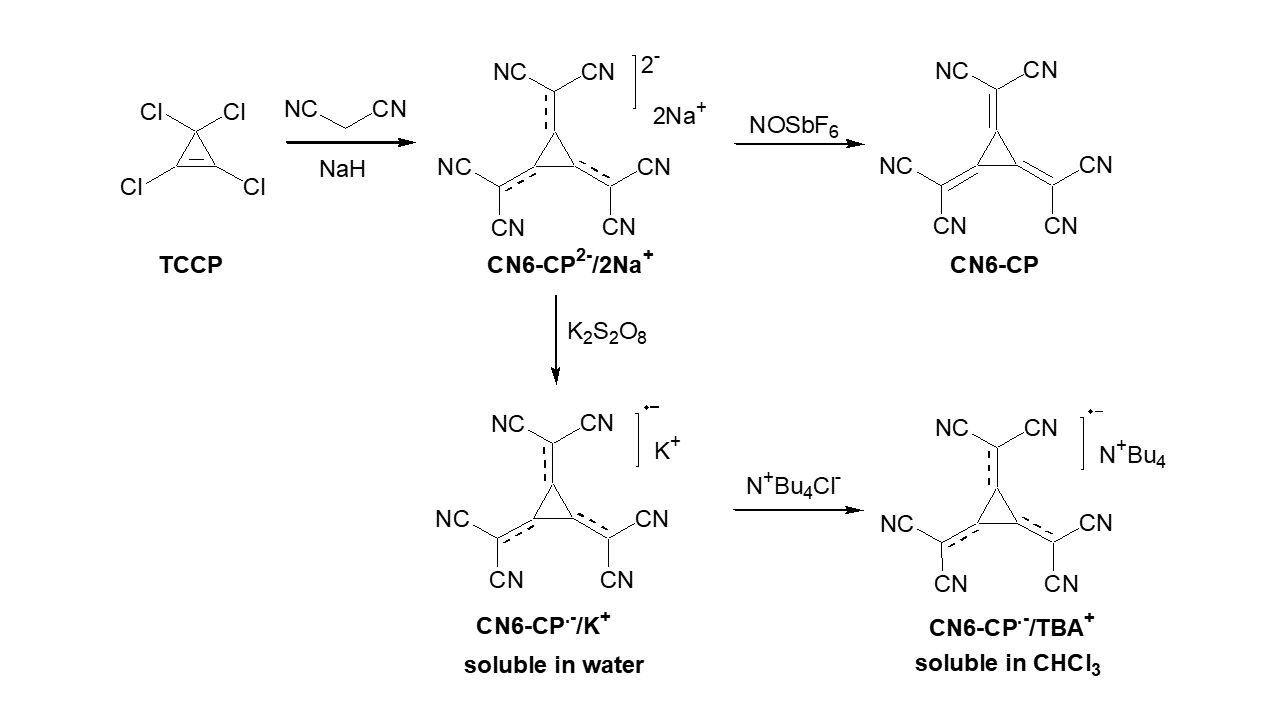 Besides studying novel dopant molecules, the processing of them as part of electronic devices is also of great interest. The most common approach is the blending of dopant and semiconductor in solution before processing the film by spin coating or other coating techniques. The downside of this fairly simple fabrication process that the presence of the dopant molecules in the bulk of the semiconductor can lead to changes in the structural order of the semiconductor or at least to the fact that they can act as traps or scattering centers for charge carriers. In our work we therefore focus on the sequential deposition of the dopant either from the gas phase or from solution. We have shown that this surface doping approach can be applied to both p-type[3,5–7] and n-type[8] semiconductors and can lead to improved conductivity, threshold voltage and/or charge carrier mobility. Alternatively, the dopant can be localized at the interface between semiconductor and dielectric in organic field-effect transistors to modify the threshold voltage and to a certain extent increase the charge carrier mobility of the device.[9] Here, we were not only able to show that by the use of self-assembled monolayers with amino groups the performance of n-type transistors can be tuned but also showed that the protonation of the amino group is a requirement for creating a free charge carrier in the semiconductor. 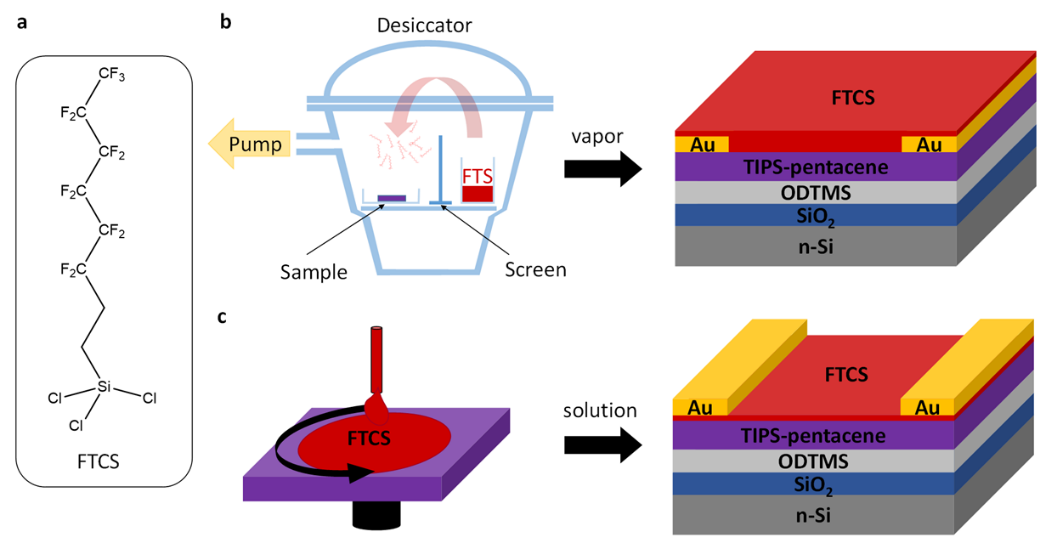